Coffee production on Ibo and Quirimba islands was first introduced by the Arab traders in the 11th Century. Ibo coffee is known for its low caffeine content. In the early 20th century it was exported from the Quirimbas to Europe, where it was used to soften coffee blends from Brazil, Sao Tome and Java. In 1906, Ibo coffee received the Gold Medal Award in Lisbon, due to its unique taste and aroma. 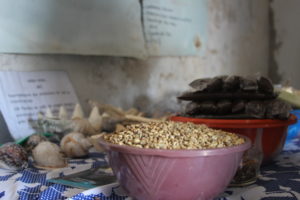 Today, this little known coffee species (Coffea Recemosa Loureiro, a minor species alongside Arabica and Robusta, that belongs to a group of species commonly known as “wild coffee’’) is mainly consumed by locals who tend to maintain their own small crops for personal consumption. There are efforts to protect the coffee and revive interest in it, led by the Ibo Coffee Producers Association who can also teach you more about this special coffee, its origins and the plans for its future.
You can this amazing coffee on the islands in different Lodges and local restaurant.

You can meet the Ibo Coffee Producers Association at its premises in Forte Santo António in Ibo (The President of the Association is Abdala Moto- Tel. 824536584)